Our second dive of the day and we dropped down in a similar spot to the first, descending down near the ridge and then having a relaxed pootle around.

As soon as I came around the tip of the ridge, I could hear frantic tank banging so I followed everyone’s gaze to see a MANTA RAY!! It was a bit of a way in the distance, further away than yesterday and with poorer visibility but it seemed to just be hovering in midwater above our heads. The current was absolutely ripping past the point and I actually had to hold onto the rocks to stay in the same spot if I wasn’t going to get swept out past the point. Wish I had been a little closer to it!

After this we hovered over the ridge and the reef for a while, checking out the cleaner wrasse, napoleon wrasse, bluefin trevally, angelfish, a couple of smashing mantis shrimp scurrying along the gravel, juvenile anemone fish, fusiliers, and a purple ribbon of nudibranch eggs swaying on the reef.

About half an hour into the dive everyone swims off into the blue, presumably to look for the manta again. Our dive guide James signals that we make a safety stop, at which point I’m mightily annoyed since I still have 100 bar and we were only 35 mins into a 50 min dive plan. I even signalled to him that I still had 100 bar and he just told me to ascend a little. Was pretty incensed during the safety stop (made for interesting buoyancy control) and came back to the boat with 80 bar and still 9 mins of dive time remaining. 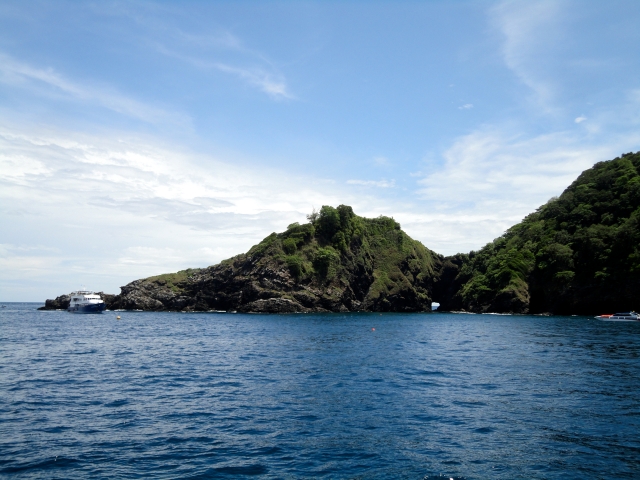