Originally when I planned this trip, I had intended to dive the Blue Hole in Belize on my 30th birthday.  However, I’d heard that it was a really short dive due to the depth so chose to dive in Cozumel instead.  Having now dived the Blue Hole, I have a tiny pang of regret at this change of plan.

The Blue Hole dive is just an amazingly different experience, even if I had to wake up at 5am (for two consecutive days even, since the dive was cancelled on the first day due to high winds!).  The Blue Hole itself was formerly a dome-shaped cave tens of thousands of years ago when the sea level was much lower.  Now, the roof of the cave has collapsed and the sea level has risen.  After rapidly descending to around 40 metres, I swam amongst hanging stalactites that were as thick and broad as old oak trees!  It made my mind boggle just thinking about how long these stalactites had been hanging for them to become so huge.  The hole is also protected from adverse weather conditions, so we had amazing visibility of around 40 metres, and we saw two large Caribbean reef sharks. 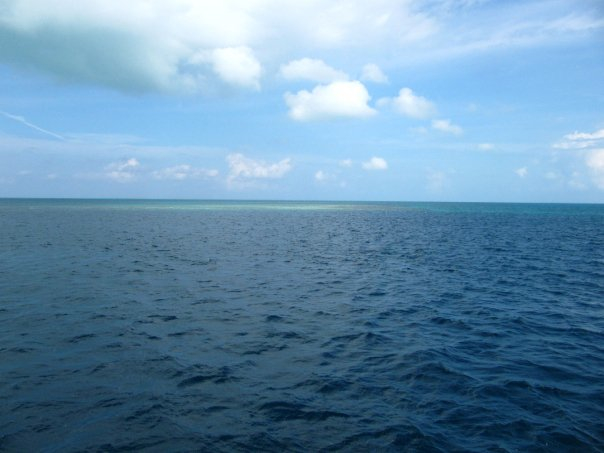 After a relatively short stay in Belize, I headed to Flores in Guatemala on the beautiful shores of Lake Petén.  I volunteered for a week at the ARCAS animal rescue centre with a United Nations cast of fellow volunteers from Germany, the UK, the US, Denmark, and Ireland.  It was quite an interesting experience, doing work that was completely different to my usual day job in an office!  I was cleaning animal cages, feeding lots of loud squawking parrots, raking sheep poo, carrying supplies up steep hills, but the most rewarding and fun task was bottlefeeding the baby howler monkeys, Tale and Carito.  They were just so incredibly cute that ARCAS were in danger of missing a baby howler when it was time for me to leave (fortunately for them, my backpack was already full!). 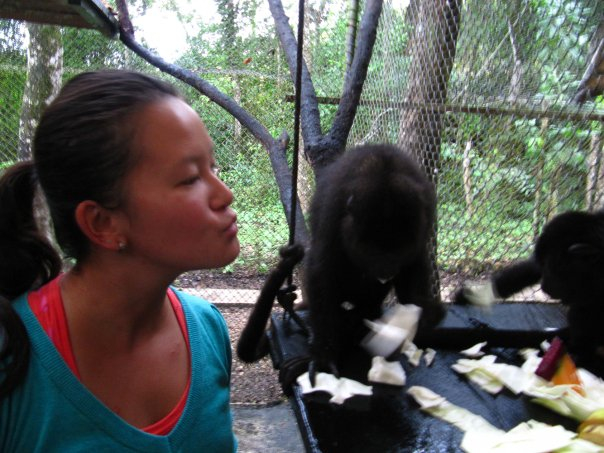 I am now in Quetzaltenango, or Xela, in the cold Guatemalan highlands, which is surrounded by many active and dormant volcanoes.  I will be here for the next 4 weeks intensively learning Spanish – 5 one-on-one hours a day, 5 days a week!  Thankfully, I have weekends off where I will be able to do weekend trips to some of the local Mayan towns and sights, and maybe even hiking up a volcano or two!

This dive was similar to the previous dive, swimming along a wall that was festooned with wild sponge and coral growth. The visibility dropped over the time that we had lunch but it was still a great relaxing dive admiring the reef.

About a third of the way through the dive, an eagle ray swam in our direction and even at one point started veering towards us before disappearing behind us. I also saw a large green moray hiding in the coral, a large grouper, parrotfish, emperor angelfish and numerous crayfish hiding in the cracks of the reef.

We dropped down to the top of the reef where it was very sandy with patches of seagrass. There were some resident garden eels poking their heads out of the sand. It was also the first time I saw conches, and the DM picked one up and showed us the little conch hiding inside.

We swam through a crack on the edge of the reef to see the wall drop off into the blue. There were huge barrel sponges, tube sponges, gorgonians, whips – a beautiful reef. Also saw 3 eagle rays in the distance, lion fish and lots of colourful reef fish and a queen triggerfish.

It was a long & rough motor out from Caye Caulker to the Blue Hole and there were quite a few seasickness casualties. Luckily I had taken a tablet and felt fine!

The Blue Hole is an enormous, deep blue envelopes you as you parachute down. At around 35m, we saw an overhang with ENORMOUS stalactites hanging down, some with girths like oak trees! It just made my mind boggle thinking about how old they were.

I saw two large Caribbean reef sharks swimming ahead of the group, about 6-8 feet long before they disappeared into the shadows.

A slow, angled ascent up although I still had 2/3 tank of air left.