Having just learnt to ride a motorcycle the weekend before last, I hired a little 125cc for the weekend to practice my skills and rode out to the pretty town of Windsor.  I dropped by Windsor Castle, where the Queen’s standard was flying high on the Round Tower to indicate that she was in!

Having missed my appointment for tea and scones with Her Majesty, I wandered around the lavish State Apartments and marveled at the beautiful paintings and tapestries adorning all the walls.  The Drawing Room even had original sketches by Leonardo da Vinci.

The ride out and back was a good experience, with a wrong turn into Windsor Great Park giving me an idea of how terrifying it is to ride in crosswinds at 50mph.

I’m looking forward to getting a bike of my own sometime next year when i return from my mammoth 30th birthday backpacking trip.  It will hopefully be a largish bike – one that will be comfortable on weekends out in the British countryside and won’t be squealing like mad at 50mph in 5th gear!

I just spent a fun weekend up in Manchester and Wigan to visit my friend Ness, who will soon be moving to Reading.  It’s not like me to turn down hospitality and a tour of Manchester, so I caught an early train up to Manchester on Saturday and we spent the whole day chatting non-stop, catching up on the last 14 months since we last saw each other.  Luckily, girls are good at multitasking and we were able to “walk and talk” while getting the tour of the city, which coincided not only with market day (delicious lamb sausages in a roll!) but also a pro-China protest. Who would’ve thought….

On Sunday, I made my first trip to the beautiful Peak District for a walk in the woods with Ness’s dog Ozzie, and all his friends!

We walked a 3-mile path from Milldale to Dove Dale, with the return trip making it a healthy 6-mile amble (or 9.7km in non-Brit speak!).  The dogs had a fantastic time whenever they were off their leads – chasing each other, sniffing each other’s bums, and retrieving sticks from the river.  The weather got a little drizzly during the day, but we stayed mostly dry.

The area around here is beautiful, and I think most of the area is National Trust, so it is definitely ideal for walks in the summer!

Easter is my second favourite time of the year after Christmas, purely for the four consecutive days I have off work. And every year I make the most of it by getting away somewhere and putting my feet up.

This year I spent the weekend in the lovely seaside resort town of Brighton.  Everyone from London comes here, because it’s only a little over an hour away by express train, but I still managed to find myself some cheap accommodation and was looking forward to seeing the ocean for the first time since Malta! (It’s hard after living in Sydney – withdrawals!)

I arrived on the Saturday morning and spent a snowy and blustery day wandering down along the shore and around the Lanes, which is just packed with fantastic little boutiques and cafes.  I’m not much of a shopper really, but even I could have gone mad here with my credit card! I ended up restricting my purchases to one really nice silver ring and a haircut (first one in about a year – it was about time!).  It was very strange to stand and sit on a pebbled beach. Not very comfortable at all, and walking along the beach is just hell! No sand to squish between your toes. Just all very alien and bizarre. 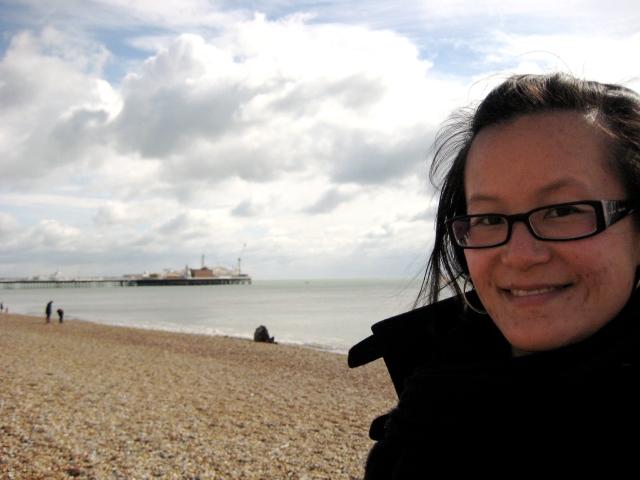 Brighton Pier is just tawdry and tacky, filled with arcade games and poker machines. I’m sure it would be a place that kids would love – it reminded me of The Entrance during the holidays back in the old days.

On Sunday I met up with my mate Kevin and for a fantastic lunch at The Gingerman.  Three courses and a glass of wine each for £50 is a bargain in my book, particularly when the food was as good as this! Then on Monday I visited the Royal Pavilion, which is really almost beyond description.  To put it simply would be to say it is unique, but really it is a huge building that looks Indian on the outside but is decorated on the inside in a Chinese style.  I think that George IV was supremely ostentatious; that would be my summary! 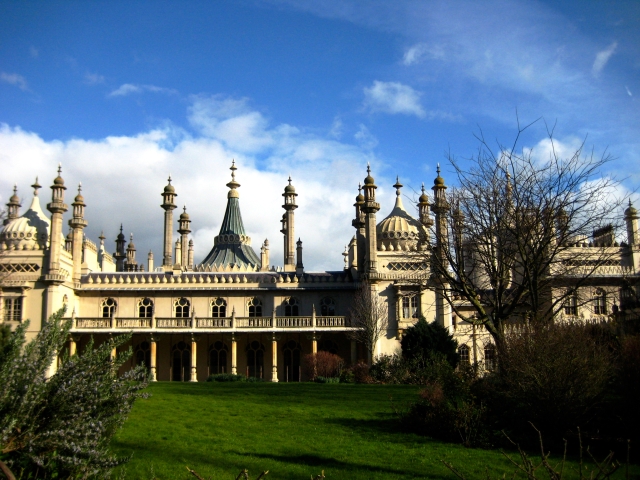 It will be interesting to come back here in summer, when there will be a lot more people.  Apparently there is more of a buzz, plus who needs an excuse to come back down here for an excellent meal and fantastic shopping?

My friend Graham once told me that pasties were the ‘food of the Gods’ and it’s no wonder when they come from God’s country itself (no, not the Shire!).

Of course, one weekend isn’t really going to do a whole county justice, and especially one as beautiful as Cornwall.  I must admit that I had pretty high expectations by now, since whenever I mentioned to anyone that I was heading down to Cornwall for the weekend, they positively swooned and could barely stop the superlatives gushing out.

It was a pretty long 5.5 hour train ride to Redruth, where Graham met me at the station.  I’m sure it was a pity that I missed most of the sights there since I’d built up quite a sleep deficit over the week and I couldn’t resist getting some shuteye.  I do love train journeys though, because they’re so much more relaxing than driving, and you can always sleep or read a book.

Graham gave me a whirlwind 30-second tour of Redruth, which he claimed was sufficient to do it justice.  However, we only sampled the pasties from a mere single bakery, so in my opinion the tour was not very comprehensive at all.

Over the course of the two days, Graham took me to Rolf Harris’s favourite view in the world from Tregenna Castle, the beautiful seaside town of St Ives (where a crafty seagull swooped and stole my ice-cream!), a cliffside walk from Porthtowan, the old mine Wheal Coates near St Agnes, and the rather hip Falmouth (though I am getting old so who knows what is hip these days!)

With so many spectacular views, I definitely think that I will come back and do the coastal walk.

Last weekend, I caught the train to the pretty little town of Bath. It’s well known for the Roman baths and the beautiful architecture and cobblestone streets.

My train arrived in Bath at around 9am on Saturday morning, and after blindly wandering around trying to find my hostel, I came across the Roman baths just as they opened. It was nice to be able to wander around without hoards of other tourists (generally we are lazy people who like to sleep in on holidays!).  The baths were green from the algae, but the thermal waters were still merrily bubbling away.  The museum exhibition was very good, with computer reconstructions of what the baths and the surrounding areas probably looked like.  My imagination was running wild, picturing myself wearing a toga back in the day! 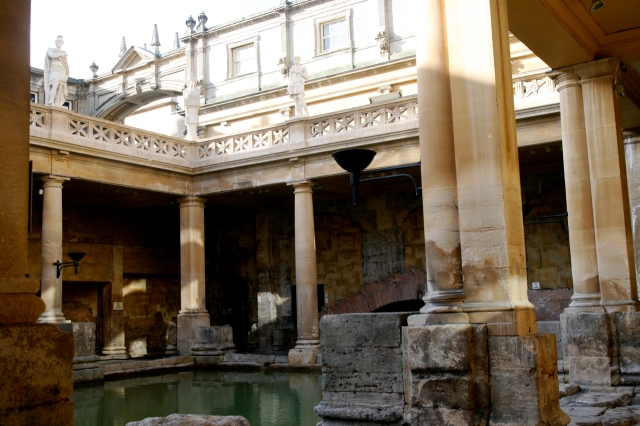 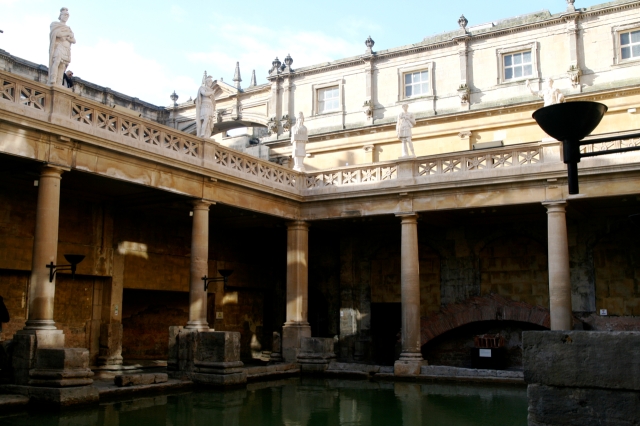 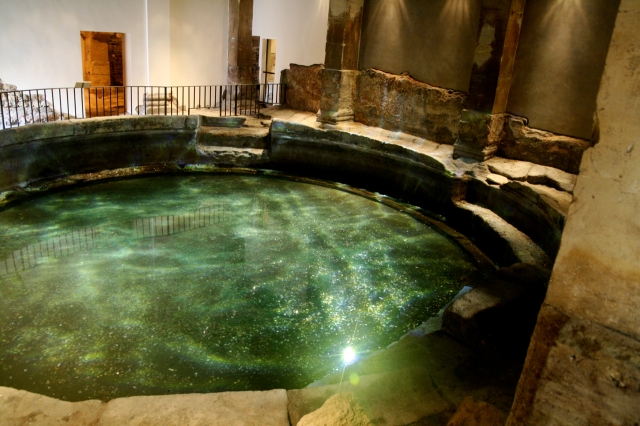 I met another Aussie guy in my hostel room, so we went out exploring the local shops, pasty outlets (of which there were many!), restaurants and cafes, and strolls along the River Avon.  Matt is a chef by trade, so it was a weekend of just talking about food! Speaking of which, I saw these in the windows of a butcher – can anyone tell me what they are?? 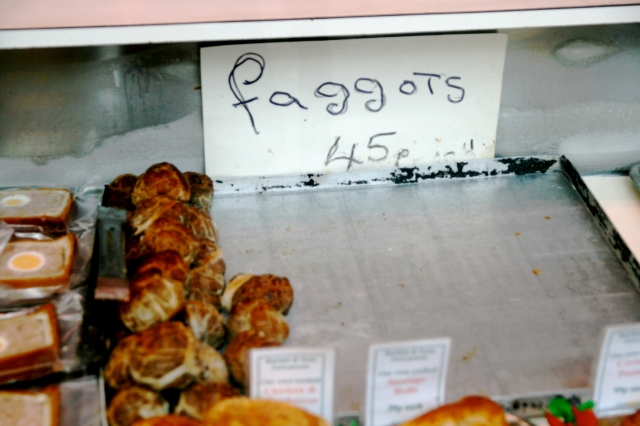 On Sunday, I went to the fabulous Thermae Bath Spa for a couple of hours relaxation.  They have a rooftop pool with stunning views of Bath and the surrounding hillside, and the bubble jets were very calming and soothing.  I also loved the steam rooms, of which there are four scented with different relaxing scents such as lavender, eucalyptus and mint.  The instructions on the door suggested spending up to 20 mins in the steam room to relax and open up your pores before standing under a cold shower.  The change in temperature is so horrific though, that I was only able to lightly drizzle my body with steaming hot body with cold water for 10 seconds at most, whilst trying with all my might to suppress my squeals!

I’m definitely looking forward to going back to Bath the next time I’m feeling stressed! 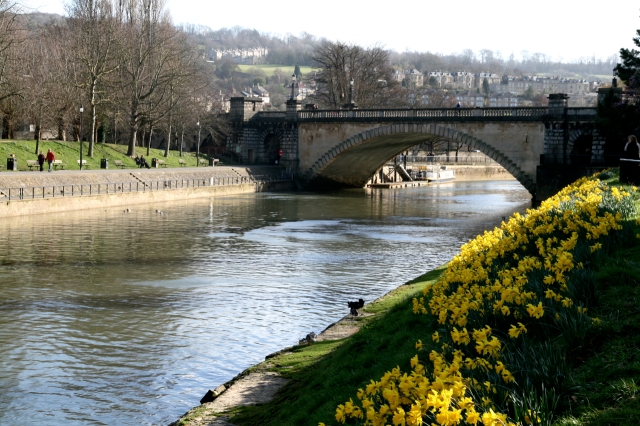